The Russian Doll Collector Provided By The National Geographic

The Russian Doll Collector will find this map produced by the National Geographic Society, a very informative accessory, it is very colorful and has illustrations of attire and captions on many of the districts of the Russian (Soviet Union) population.

From the map, you will be able to identify costumes that are worn by Russian dolls as well as to acquaint yourself with information from that region.

Following is quoted some of the information which has been updated from the earlier map. Even it is outdated as you will see by reference to Soviet Union, but the regional data is helpful in determining its relation to the Russian dolls we long to identify. The pictures do not relate to any of the descriptions.

".......the Turkic speaking Kazakhs have for centuries been admired as skilled horsemen. Some of the semi-nomadic people still live in yurts, circular tents of felt."

"From the base of the snow-crusted Tien Shan, turbaned Kirgiz falconers on horseback release their birds to search for prey in the blue skies above small farms and pastures." 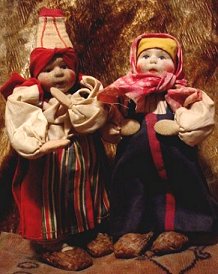 "Their traditional homeland was centered in Northern Turkey, but Armenian culture today thrives chiefly in Soviet Armenia. Armenians form a highly concentrated population in the rocky valleys of Transcaucasia."

"The Turkmens, noted for their frontierlike spirit, now raise large quantities of cotton and breed the sheep that produce "Persian Lamb." 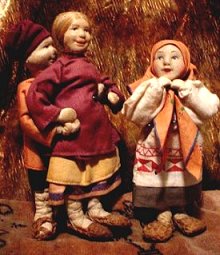 eBay has a rather large set of listings of vintage Russian dolls for sale, if you are interested in a purchase, or to find values,

---if looking for values, it is necessary to register with eBay.

"Lovers of wine, spicy food, and song, Georgians are known throughout the Soviet Union for their open-handed hospitality.

Famed for longevity, at least one in every 2,500 Georgians is a hundred years old or more." If you have ever had the privilege of watching the Georgians dance in the Russian Ballet group that toured the US shortly after the cold war ended, the dance which they performed held you spellbound.

Dressed in black.....all men.......they leaped to heady heights......and returned to the ground on the arch of their feet! Magnificent. 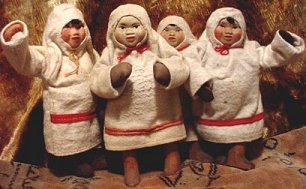 "Their land, the gateway or the obstacle to Moscow in World War II, Byelorussians suffered the full force of Nazi invasion.......one of every four people in the republic perished".

"White Russians" have various explanations for their name: their once predominately white clothing, their fair coloration, their freedom from foreign domination." 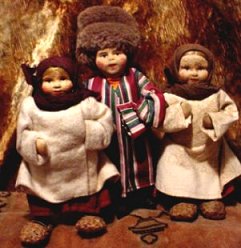 click here to return to the Russian Dolls main Page

eBay is an excellent website for "value" information about dolls, or most anything else for that matter--however, to see what something has sold for, registration is required, so if you are looking for past sales of any particular doll, please register.